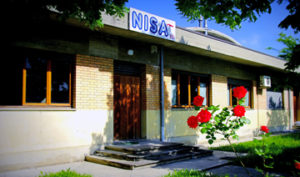 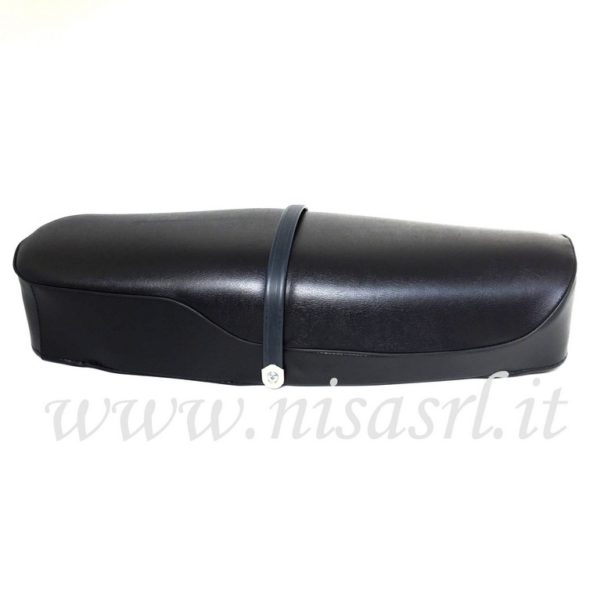 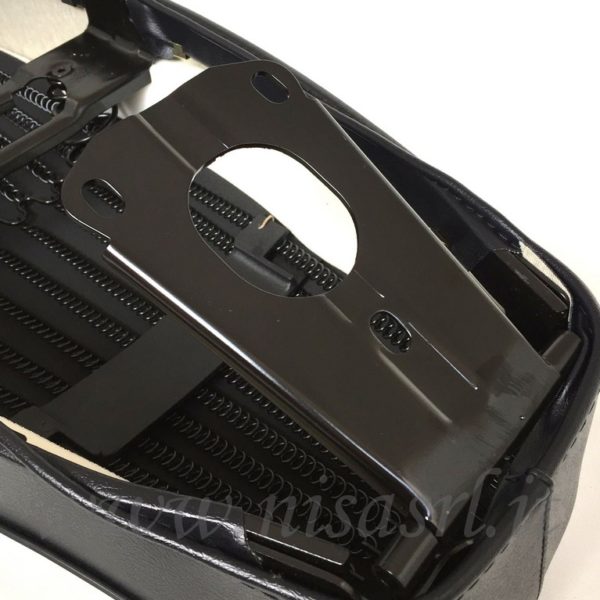 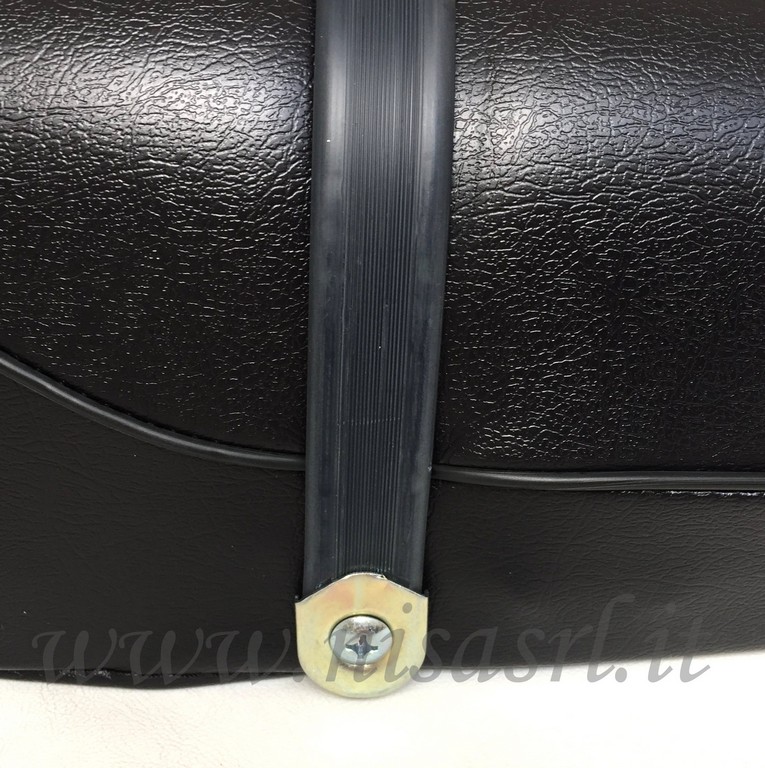 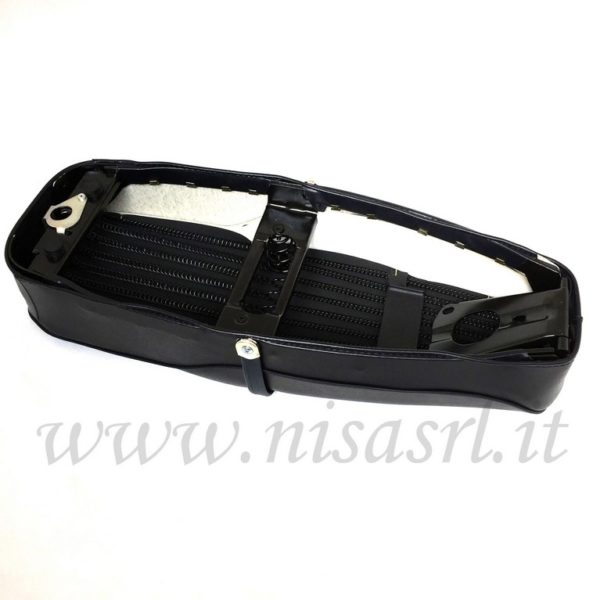 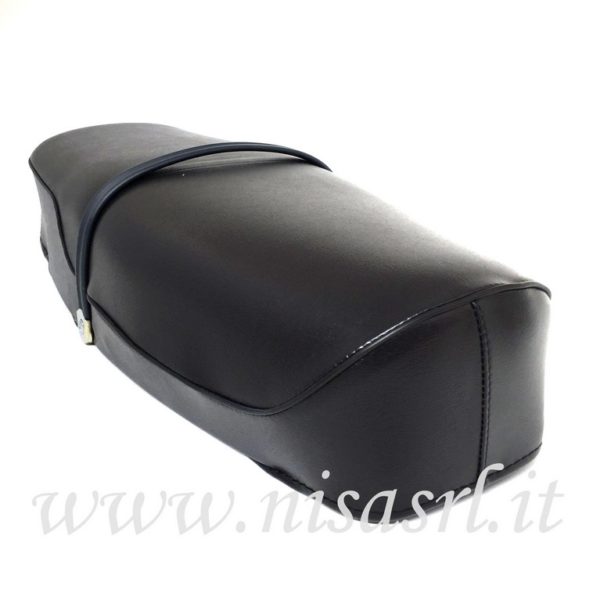 Our article 0668, two-seater saddle for Vespa Rally 180/200, is just like the original that Piaggio was assembled in the assembly line in the ’70s.

The cover is faux leather, water-repellent and resistant to atmospheric agents, which can also be purchased individually, such as padding, springs and all the components to restore your original Rally saddle.
The closure is a lever.
The spring frame in black powder coated iron gives this article reliability and strength.

Our article 0668, two-seater saddle for Vespa Rally 180/200, is just like the original that Piaggio was assembled in the assembly line in the ’70s.
In those years the saddles were made of a robust iron frame 5 mm thick (NB on the market today there are much thinner and brittle looms!) With a dense network of springs held centrally by a serpentine spring or commonly called “Greek” .
To help support the weight of passengers, two tapered springs were used centrally to cushion the roughness of the ground.
In those days the streets were not like today’s! (at least not everywhere) many holes and dirt roads had to be faced by Vespa fans all over the world! So this type of saddle allowed to improve the comfort and “spring” away in comfort.
The rally, in particular, was considered a flagship among the Piaggio fleet and, as reported by a famous slogan of those times, the Vespa Rally was characterized by:
“Two powerful wheels, snappy, two wheels with ready reflexes, two” rally “wheels driven by the new 12 horsepower engine that grow up to 5700 rpm, two powerful wheels whizzing in complete safety on the 110-hour line”
It could not miss a wide saddle, suitable to bring two people comfortably.
The standard color was the classic Blu Piaggio, a very dark blue that with the years many exchange for black; the dark border and a rigid blue handle with round ends; the cross screws.
The cover is faux leather, water-repellent and resistant to atmospheric agents, which can also be purchased individually, such as padding, springs and all the components to restore your original Rally saddle.
The closure is a lever.
The spring frame in black powder coated iron gives this article reliability and strength. 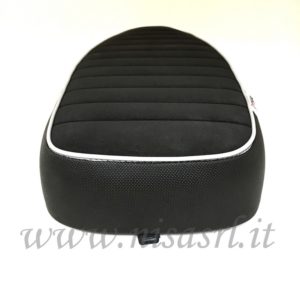 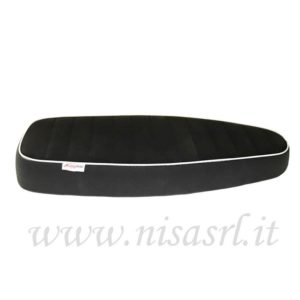 An exclusive line of saddles designed and created by Nisa and Plc The combination of valuable elements, such as an Alcantara style faux leather with a striped pattern created with tone-on-tone stitching and a thin gray piping, makes the seat refined and sporty. The padding is made of high-density rubber and the saddle bottom is made of sturdy black painted sheet. All saddles fit without modifications to the frame and are complete with fixing plates. This item fits Vespa ET3, 50 Special / 90/125 Spring. 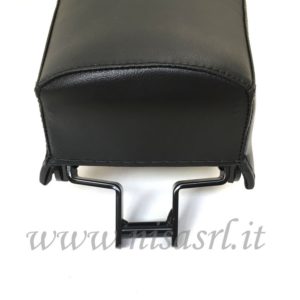 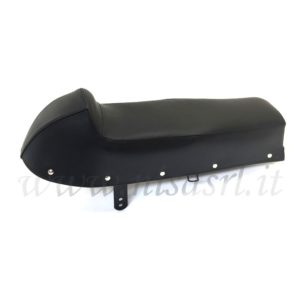 Saddle art. 0422 Seat cover art. 2422 The Ducati Mach 1 is a little jewel for fans of vintage motorcycles and more. For the restoration of this bike you can not choose pieces of poor quality. Our saddle for Mach 1 is identical to the original. The frame is made of sturdy spring-loaded iron, painted black, with a rounded back. The saddle cover is a rubber covered in black imitation leather with steel-colored studs on both sides. Made in Italy with the best Italian materials. 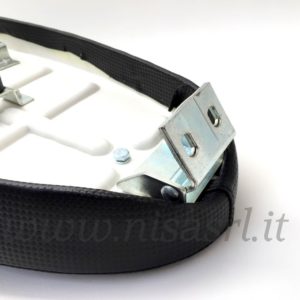 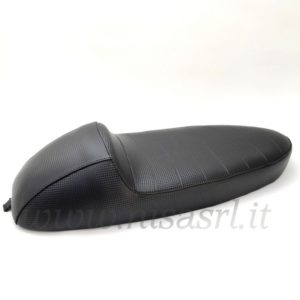 Seat Vespa Racing  consists of a saddle bottom in printed abs that gives the saddle a unique appearance. 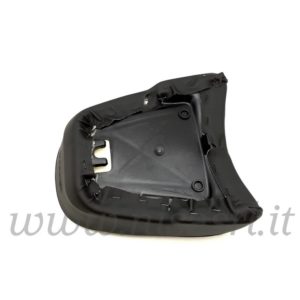 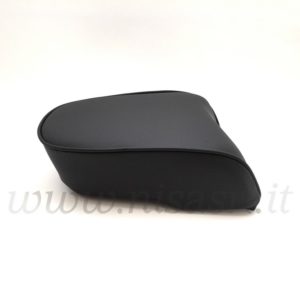 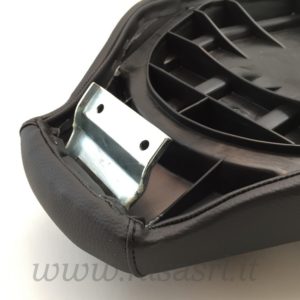 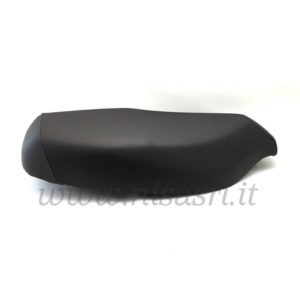 Our saddle for the Typhoon is like the original. A comfortable pre-shaped polyurethane padding guarantees maximum comfort for your travels. The seat cover is in black leatherette resistant to abrasion and atmospheric agents. Made in Italy with 100% Italian materials 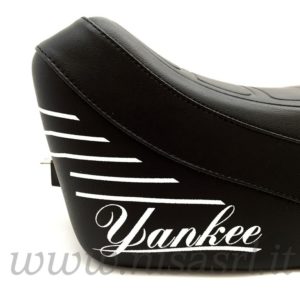 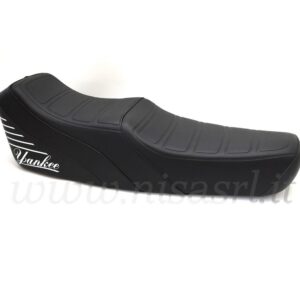 Saddle Yankee for Vespa 50: a comfortable seat makes it suitable for long journeys. The padding is in high density polyurethane foam, for maximum comfort. The saddle bottom is in sturdy sheet painted in black. The saddle is complete with lock. The seat cover is definitely unmistakable. Note the striped serigraphy, the Giuliari symbol with the double G enclosed in the cloverleaf and the inscription Yankee on the side. It is in black leather that is UV-resistant and water-repellent. On the seat presents the 'striped' type as the original. Also available as a replacement item (article number 2756) This saddle adapts to the models: Vespa 50 / Et3 / Primavera Made in Italy with top quality Italian materials. 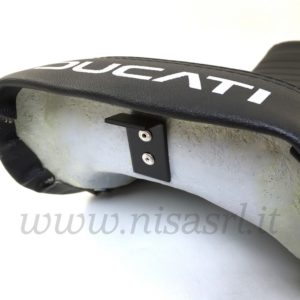 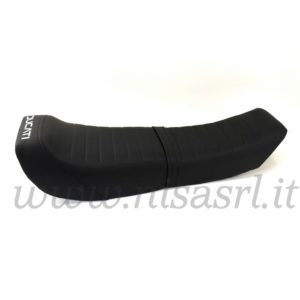 Saddle for Ducati Darmah Saddle in fiberglass, polyurethane padding and black faux leather seat cover with handle. Back screenprint in white
Saddle art. 0424
Seat cover art. 2424
All our items are produced at our headquarters in Forlì, we choose only top quality Italian materials. 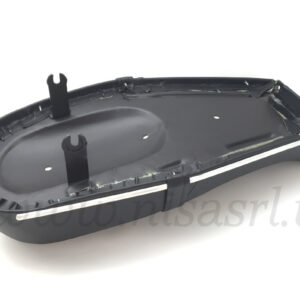 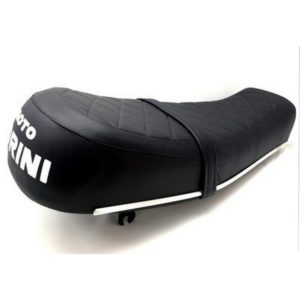 A special saddle for a bike that has marked the history. Built and finished in detail, like the original in shape and color. Bottom in iron sheet and padding in polyurethane. The cover is made of black faux leather, on the top it has the 'chess' print as the original of the' 70s. Rear Screen Printing, white on black and belt. Seat art. 0032 Seatcover art. 2032 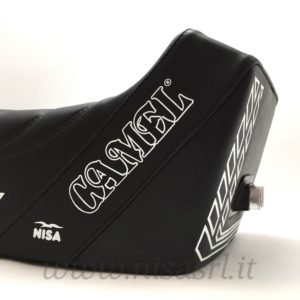 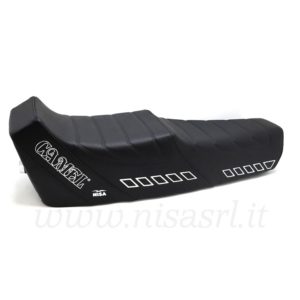 The seat cover is definitely unmistakable, with the characteristic 'square' screenprint on the back and side and the writing Camel on the side (black on white or white on black). On the seat, the seat cover has a striped effect molding. The seat cover is in black leatherette resistant to abrasion and atmospheric agents. A stapler is required for the assembly of the article. Made in Italy with top quality Italian materials. 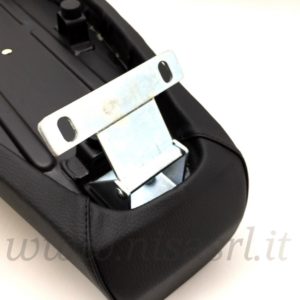 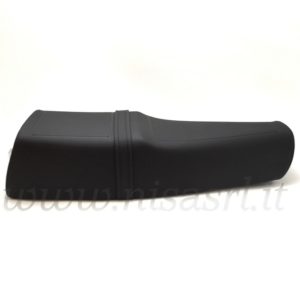 The saddle is made of a sturdy base in black painted sheet metal, a comfortable pre-shaped polyurethane padding that will make all your travels comfortable. The seat cover is in top quality black leather with a print on the upper part. The saddle is complete with lock and handle. Saddle pin included. This article is suitable for: Vespa PK 50/125 XL and PK 50S
©NISA s.r.l. - P.IVA 00136890407
Created by  Emmebistudio - the business process innovation.